For all things sticky and fun! 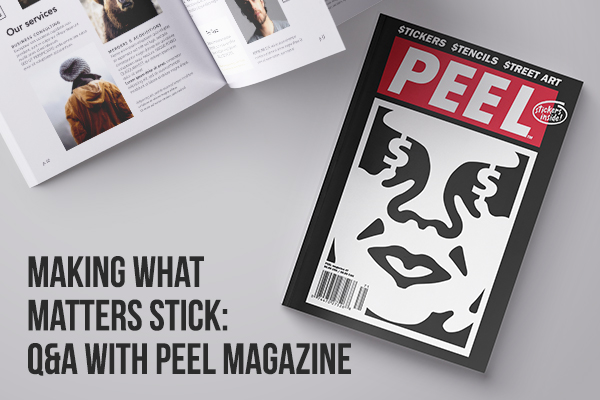 The history of sticker art is deeply rooted in street culture. Since glue and paper first came together to create these portable canvases, artists around the globe have used stickers to disrupt, to fascinate and to make an impression.

At StickerYou, we believe in the power of stickers to fuel self-expression and creativity. So we sat down with Dave and Holly Combs, sticker artists and founders of the iconic PEEL Magazine, a publication that galvanized the worldwide sticker art scene from 2003-2008, to find out more about the creative roots of stickers, and how they can change the world.


What first drew you to stickers?

Holly:  It all began 19 years ago, when we were designers obsessed with typography. I had an internship at a museum in Indianapolis, and I’d been asked to do an exhibit around comic sans font. Like many designers, I hated comic sans. So Dave started thinking, “What if we were to ban comic sans?”

He started making stickers that said Ban Comic Sans, and we started sticking them around ads that were using comic sans font. One of those ads was for our pediatrician, and he made a new sign in Helvetica. When we saw that, we knew we could change the world!

How did you discover other sticker artists?

Dave: Because of the Ban Comic Sans campaign, we made a little website. People started emailing us from other places I’d never heard of, other countries. Saying things like, “It’s so great you’re doing something about this terrible typeface,” and asking for stickers. And we found out they were making stickers of their own. They would mail their stickers back to us. So we had this collection of stickers from people all over the world. That’s when I realized that this was something that not that many people knew about but a lot of people were involved with.Once the zine went out, people starting reaching out and it started snowballing.

Holly: There was a whole worldwide movement of people using stickers to disrupt. But no one was documenting it. We were the mama and papa of documenting a whole art movement.


And that was the beginning of PEEL?

Holly: We thought maybe we could document the whole sticker movement with a zine. So we started looking for artists using stickers to say something important to them. We started PEEL in 2003.

Dave: We made 200 copies for the first edition, then later, by 2008, we were making 30,000 copies. It went international. People were really excited to discover sticker art. We kind of spread it.

What are some of the most memorable stickers for you?

Dave: The very, very first sticker that made me want to do my own was Shepard Fairey’s Andre the Giant Has a Posse. When I saw those it sparked something for me. It was all about phenomenology - reawakening a sense of wonder about one’s environment. The purpose was to cause people to re-see their surroundings. I saw the power a simple sticker could have.

I’ll never forget the You are Beautiful stickers that we traded with Matthew Hoffman. I was really impacted by those. Just the message and concept that there is so much advertising in the world that tells us to buy a car in order to be beautiful and the sticker was countering that message.

Robots Will Kill was another. The artist, Chris Chillemi, became a friend. You could put your own meaning to his message. If you just follow the masses, how far would you go?

Why were stickers so popular at that time?

Dave: Some people call street art a post-graffiti movement. I don’t like the terminology, but I think the reason why people said that was because people who were involved in graffiti art wanted to be a part of that but didn’t want to take the time to make a beautiful graffiti piece. But you could take all the time you wanted to create a beautiful sticker and put it up. There was less risk involved.

Shepard Fairey’s Obey Giant had something to do with it, I think. People were trying to become visible with stickers. Gallery artists would make stickers on the street to rep gallery art. And it’s fun! I think that’s part of it too. A lot of these guys were in their 20s, early 30s, and grew up with sticker books. Fun, visibility, accessibility, the notoriety, street cred of having stickers up all over place. And low risk factor. All of that.

Why did you stop PEEL?

Holly: It felt like the right time to stop it. It became a marketing thing. We were getting contacted by people in marketing to create stickers to sell cars.

We also had 18 credit cards to finance it. No one had heard of predatory lending yet. Banks were offering cheap credit and I was just happy to have funds to keep this wonderful project going. In Indianapolis in our gallery we featured street artists from all over the world selling their work, but no one was buying. It was a house of cards, and one day the house of cards just fell.

Dave: After we lost everything in the collapse of the magazine, Shepard Fairey got a hold us, and said he wanted to help. He wanted to collaborate on a poster design and give us the proceeds. We did a poster called Sticker Kit. He posted it on Obey Giant, and it sold out in less than an hour. He gave us a check for $10K. He didn’t have to do that, it was a very kind thing for him to do.

After PEEL, what did you do next?

Holly: We both became art teachers and it was very therapeutic. We work a lot with the power of words, and recognizing the labels we give ourselves, and each other and how those labels change the way we see ourselves and other people. In one of my projects, I empowered kids in a classroom to make their own stickers rewarding good behavior, even if they didn’t earn them.

We’ve done over 94 murals. Dave teaches kids how to draw self-portraits, then he puts the self-portraits inside of a large stencil of You Are Beautiful inside schools on walls. It’s a very beautiful addition.

I also wanted to take this message and put it to work in juvenile prisons. These are kids that have been labelled terrible things by other people, and I wanted to help change their perceptions. So I brought in some You are Beautiful stickers and started putting them on their ankle bracelets. Apparently you’re not supposed to do that. I got an official letter saying to knock it off. But I never stopped. It’s a really beautiful thing, breaking bad rules.

Dave and Holly are continuing to bring the creative community together with their latest print zine 5 to 9 zine, dedicated to side hustles, passions, projects and businesses, merging art, education and activism.

BACK TO BLOG | BACK TO TOP