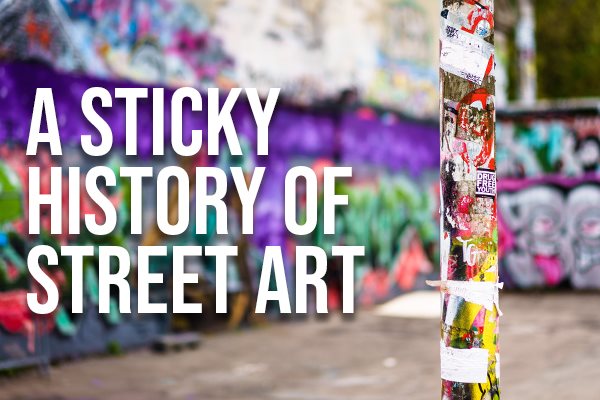 Throughout the past 50 years, street art has transformed the environments we live in. Since the 1970s, stickers and other graffiti art has evolved from rebellious street tagging into it's own styles of art. Graffiti art has changed the traditional idea of 'fine art'. It has opened up opportunities for more people to participate in the art world and establish artistic careers outside of traditional gallery connections. In this blog post, we will dive into the rebellious history of sticker art and its evolution from alternative to mainstream culture.

The rebellious teenagers of the 1970s pioneered tagging their names in public spaces. If you remember the 1970s, you may remember that in New York City, the tag ‘TAKI 183' mysteriously started to appear everywhere. Newspapers wrote about Taki 183, so it generated a lot of attention and confusion around who this Taki person was, and where he came from. It was eventually discovered that Taki was the nickname of Dimitraki and 183 was his street address. Taki was considered one of the first people to use stickers as part of his graffiti. He would write his tag on a paper sticker and stick it on walls of public places. Many people were intrigued by Takis tags around the city, and began to add their own names and street addresses. As the number of graffiti artists rose, designs became more elaborate in order to stand out against the rising competition. Artists moved towards a more “wild style” of graffiti. This consisted of grander tags that were much larger, more colorful, and in harder to reach places. Stickers and wheat pastes became more common in wild style graffiti art as a way to accomplish these more unique and detailed designs. 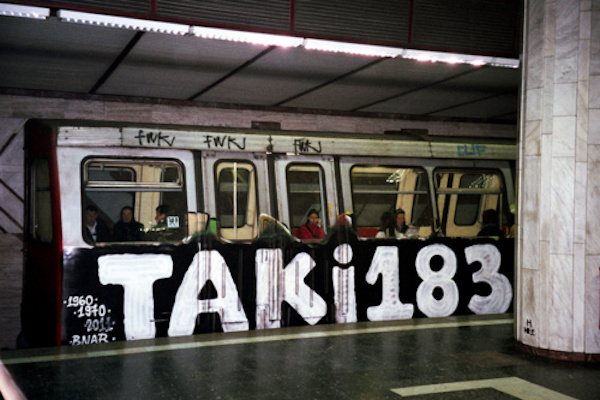 The 1980's brought stickermania to North America. Everyday sticker use transformed from function to fun. Kids collected puffy and scratch and sniff stickers in sticker books and skateboard brands started giving out cool stickers in their magazines. Sticker art was established as an independent art practice outside of paint graffiti when Shepard Fairey created his inaugural, “André the Giant has a Posse” sticker. Faireys sticker became famous on a national scale. In one summer, his hand made stickers had overtaken his hometown of Rhode Island. Unlike paint graffiti, sticker graffiti art was able to be sent to far away places through the mail. Fairey was able to send his stickers around the world to be stuck in places he had never been to, creating an unprecedented reach for a graffiti tag. Fairey went on to create the Obey campaign, whose motto is “fostering quality dissent since 1989”. Since then, stickers became a staple in the graffiti art landscape, from large pasted posters to hand drawn designs on stolen shipping 228 labels. 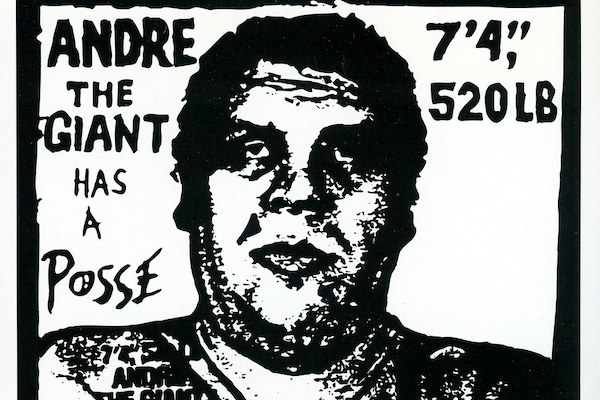 The 1990s is considered by some people as the golden years of sticker art. More sticker artists were emerging and expanding the scope of sticker art to include everything from personalized skateboard stickers to large wheat-paste murals. Stickers were still mostly hand-drawn and traded throughout the local sticker art communities. Later, sticker trading expanded world wide when sticker trading groups moved onto the internet. Many stickers were hand drawn on 228 shipping labels because they were given out by United States Postal Service for free, you might recognize this trend from around your neighborhood today. Predictably, anti-graffiti campaigns emerged alongside the flourishing of graffiti art, driven by city officials to preserve private property or keep the city ‘clean'. In New York City, a lot of time and money in the 1990s was spent in an attempt to crack down on graffiti. However, removing graffiti was expensive and essentially supported artists by presenting them with a fresh canvas, so attempts to control graffiti art were mostly futile. After years of unsuccessful ‘clean up attempts, cities leaned towards beautification strategies of graffiti control by hiring artists to create murals on top of graffitied walls and designating specific areas for street art. 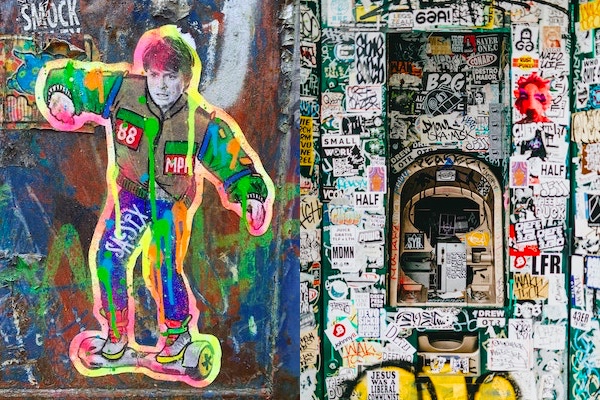 When public opinion started to change about graffiti, the lines between graffiti art and more classic art practices started to blur. Something that was once a public nuisance, was then being added to the fine art cannon. Rather than being painted over, street art had started to be removed from walls and displayed in prestigious art galleries. Although it may be similar in style, some artists believe that the graffiti art shown in galleries is not considered real graffiti because it lacks the evolutionary change that they believe is fundamental to street art. While galleries presentation of art remains static and controlled, art on the street is constantly changing as other artists rip it down, elaborate on it or cover it up. In 2002, Artist Yayoi Kusamas united the fine-art gallery space with the spirit of graffiti street art. In the Obliteration Room, visitors were invited to participate in creating the space by covering all the surfaces colored stickers. This is a micro-version of how graffiti artists were participating in creating the art and landscape of their city with their own tags and stickers. 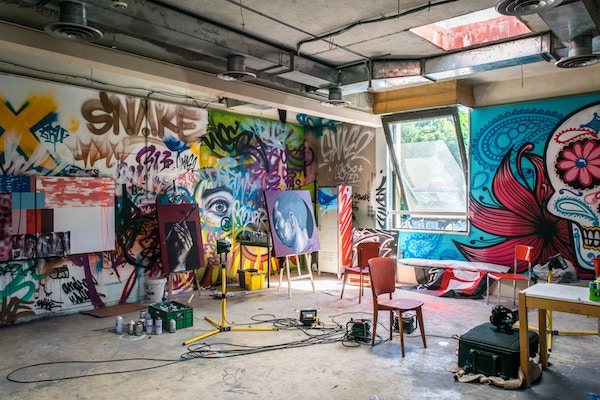 Eventually, sticker art was recognized by other artists to be an effective and artistic way to promote and distribute information for their other art projects. Many artists started utilizing the guerrilla messaging effect of graffitied stickers to spread their messages through a medium that was once dominated by advertisements. Matthew Hoffman created the You are Beautiful sticker to put up in public places to spread this uplifting message. While Hoffmans art could still be considered graffiti or vandalism, the project wasn't about the act of graffiti. Instead, it was about promoting the ‘You Are Beautiful massage itself and using the space disrupting quality of graffiti to do so. Artists Dave and Holly Combs witnessed and then embraced the way that graffiti was transforming the public space, “it (graffiti) was art in the highest form: pure, uncompromising, provocative”. As artists, they wanted to illustrate graffiti's impact on peoples consciousness, so they created the Ban Comic Sans sticker campaign as their own addition to the graffiti landscape.

As graffiti sticker art became more mainstream, artists had to navigate a new-lifestyle where they could make a living off of their art. This was obviously great for street artists, but they were also then faced with the new threat of being a sellout. Sheppard Fairy's stickers and art has appeared in galleries and murals but he still continues to advocate for street art to remain on the street and accessible to everyone. Fairy sees street art as a way to disrupt the exclusivity of traditional arts. He says that anyone with a sticker design or idea can contribute and make it big in the graffiti art community. The internet has helped preserve the grass-roots community of sticker artists. Artists can now trade and share their stickers worldwide with websites dedicated to the street art and sticker art global communities. As politicians flirt with the idea of legalizing graffiti, some street artists insist that street art should remain illegal to preserve the liberation it brings from rejecting society's rules. 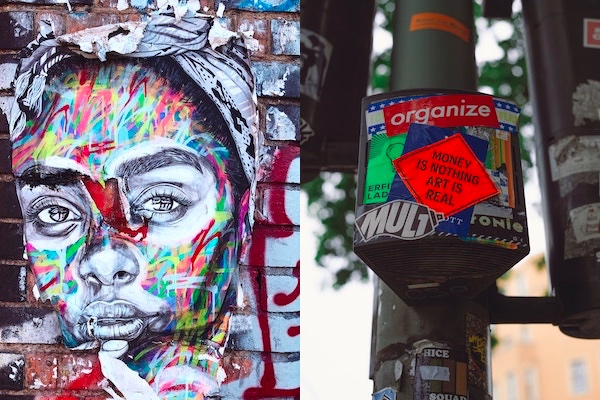 Today, artists continue to spread their tags, artwork and activism through stickers. To see what is currently happening in the sticker art world, take a walk around the streets of your city or look online. Some sticker artists to get you started are … @obeygiant, @peelmagazine, @enx108, Shtexclamation, Faile, Wolf, Cody Banks, Ben Frost. If you are inspired to create your own stickers, it's easier and more accessible than ever to participate in the sticker art movement with StickerYou's online sticker maker. Get out there and make your artwork stick!